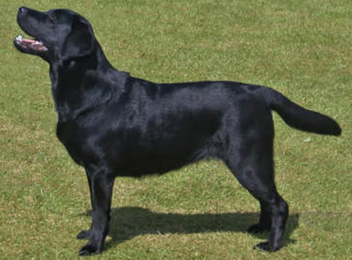 ICYRIVERS MYOHMY BY CARRIEGAME x LIGHTBRINGER JITTERBUG
﻿HI﻿PS 3:3 / ELBOWS 0:0 / EIC, CNM, HNPK & DM CLEAR / PRA CARRIER
CRUFTS QUALIFIED 2014 & 2015 / BASC GAMEKEEPERS RING 2015 & 2019
KENNEL CLUB BRONZE GCDS AWARD
CRUFTS QUALIFIED FOR LIFE - WORKING BITCH CLASS
KC WORKING GUNDOG CERTIFICATE (ON GAME)
​Ebony is Megan's daughter and she is my girl of a lifetime! She is a lively soul, with plenty of character but she loves to please. She was the only Bitch that survived in what was a disaster litter and is a very special girl. Like all my dogs, she has taken time to mature and she has been hard work at times but I love her to bits and wouldn't change her for the world. She is line bred to INT CH Ole and this mating worked very well.   ​
We have only shown Ebony occasionally as she does not like showing due to some rough handling by a judge but despite this, she has had some super results in large classes at Championship shows and she is placed regularly at Open shows. She qualified for Crufts 2014, winning the Labrador Puppy Bitch class at Bath Champ show and she qualified again for 2015 at the same show, gaining a 3rd place in a large junior class of 16. After a litter and a full season picking up, at her first Champ show back out last year, she did us proud by being placed in the Limit and Open Bitch classes at the Belfast Dog society in strong company. Ebony has qualified for life to enter the working Labrador bitch class at Crufts and she is also shown at Crufts in the BASC Gamekeepers ring. She passed the Kennel Club Bronze Good Citizen dog scheme award at 10 months of age.

Critique - Cots & Wye Open show 2019: 2nd Working D/B - "Kind, attentive black bitch, good length of muzzle to perform her job. Excellent front with lots of heart room, well set otter tail, beaten on movement today." J Keating
​ ​
Ebony has just finished her fifth season picking up and we also go beating occasionally. She is a very keen worker but is steady, quiet and a superb game finding dog. She will enter thick cover for a wounded bird that only spaniels can usually get into! Ebony has matured into a super picking up dog and she gets better with each season. She was awarded the KC Working Gundog certificate on game in 2015, after being assessed working on a shoot day by KC Field Trial B Panel judge Michael Brown. She didn't put a foot wrong all day and we had some lovely comments from the judge. I am so proud of her, as she is very driven and training her has been hard work! Both her daughters Rosie and Emma have also been awarded the KC WGC on game, after being assessed on a shoot day picking up.
Ebony had her first litter to Carromer's Blue Lagoon and we kept one of her daughters, called Rosie. Her second and last litter was by our special boy Bailey and we have kept a bitch called Emma. Both Ebony's daughters have been awarded the KC WGC on game.
After a long break from the show ring, Ebony was back out in February 2019 and she came second in the working dog/bitch class at the Cotswold & Wyevern LRC Open show, just being beaten by her daughter Emma. We may show her in the occasional veteran class in future but working is definitely her thing! She will join her daughter Emma and Grandson Ollie picking up on a shoot in October 2021.   ​
​
Copyright © 2014 - Lightbringer Labradors, images and text. All rights reserved.